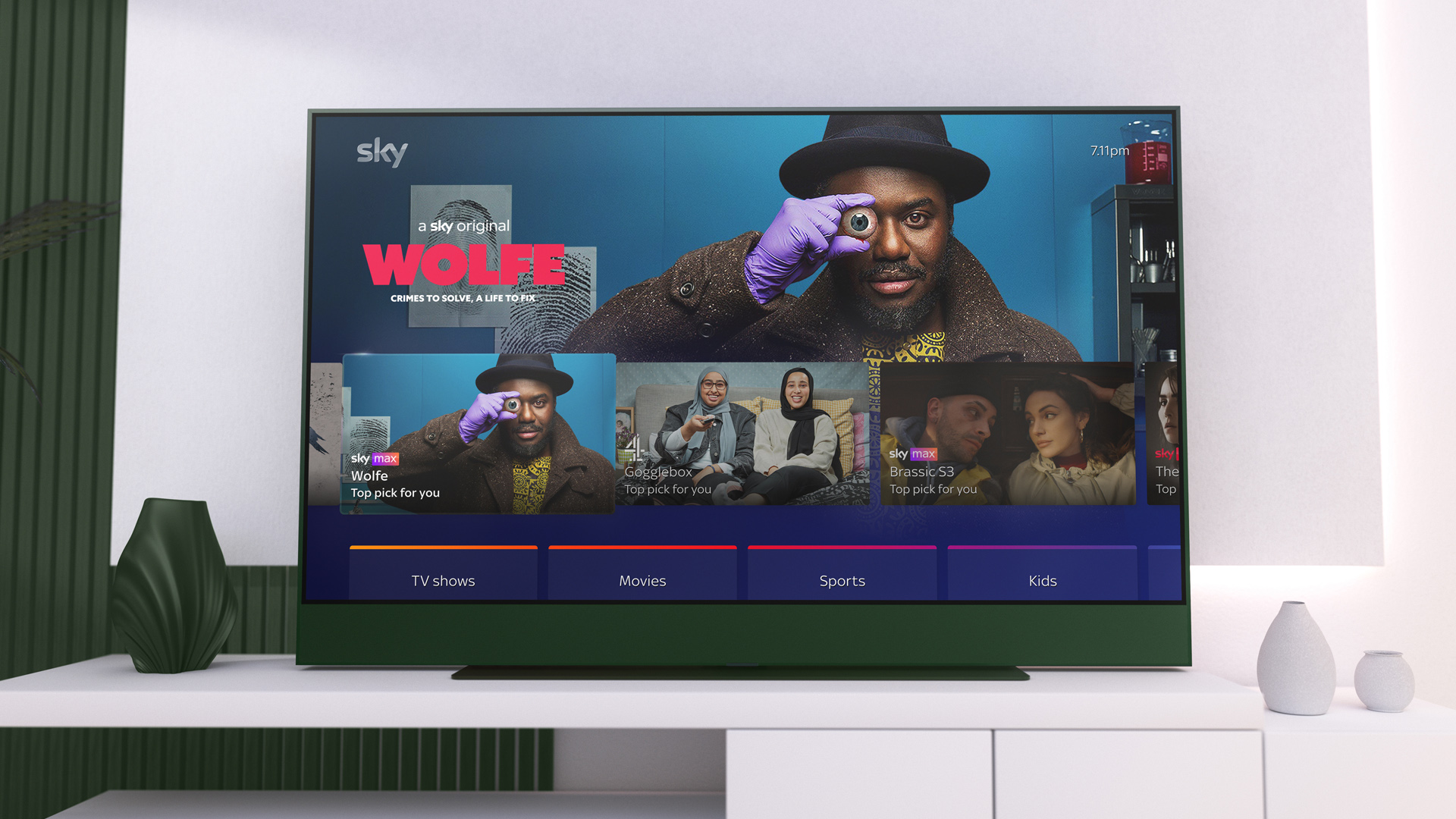 Sky Glass represents a paradigm shift in the premium TV market. For the first time, a satcaster is offering an all-streaming alternative to Sky Q, dispensing with a stand alone telly box and external dish aerial.

For many, it'll be just what they've been waiting for - particularly if they were also hankering for a 4K TV upgrade.

But to appreciate Sky Glass, you need to appreciate what it's not - and that's a straight replacement for Sky Q. It's not as channel rich and suffers from not having any recording functionality.

But, equally, it's something we've not seen before, a premium TV service integrated into a bespoke flatscreen.

Usability leans heavily on voice control, but you'll not want to leave the traditional zapper too far out of reach.

The most contentious aspect of Sky Glass hangs on its everyday usability. Instead of 'Recording' content, you add it to a 'Playlist', which can be fed from several sources.

You'll need to be prepared for some restricted availability when it comes to watching - and some content can't be re-streamed after broadcast at all.

Overall, the Sky Glass all-in-one premium TV package opens the door to a new age of streaming TV... but consider how you watch TV, and what features you need, before jumping in.

One of the many notable aspects of Sky Glass is the pricing plan. You don't need to think about having to buy your Sky Glass TV like a regular flatscreen, as you get it as part of your monthly sub, payment depending on the length of your contract and the Sky services you contract for.

Choose a shorter 24-month contract and they become correspondingly more expensive, at £26, £34 and £42 monthly. That means the 55-inch set reviewed here has a retail equivalent cost of £816.

On top of that add your chosen Sky subscription channel package (prices vary, depending on whether you want to graze on movies and sports). There's an additional cost for 'Ultra HDR and Dolby Atmos' pack (we'd say that has to be a must), and multiroom.

Sky Glass doesn't require you to have Sky as a broadband provider. It'll work with any ISP. This system became available in November 2021 and is available to order now.

Sky Glass doesn't look like an everyday flatscreen. Sky has made some bold choices when it comes to design – the set is deep with a flat back and up top, behind a metallic grille, are two upfiring height drivers.

The remaining speaker array faces forward behind a fabric panel, with the left and right output partially directed through side grilles.

The frame is aluminium, with no Sky logo. It's very minimalist, even chic. Adding to this interior friendly approach are the five colourways: Ocean Blue, Ceramic White, Racing Green, Dusky Pink and Anthracite Black.

As it happens, our review sample was the all-back edition, which to be honest, is the least interesting, but will probably be the most popular - black usually always outsells other colour options when it comes to home electronics.

Still, you can enliven things with a choice of customisable speaker fascias, to better match with your interior decor, or show an element of individuality.

Around the back are three HDMI inputs, HDMI2 with eARC. There's no support for 4K 120fps video playback or VRR. Sky Glass even lacks a dedicated low input lag Games mode. We measured input lag at 115.4ms (1080/60), which means the set holds limited appeal for serious gamers.

There is a terrestrial Freeview aerial input, although this is provided for back-up when your broadband goes down, and not everyday use.

The TV ships with a heavy metal pedestal stand that adds substantially to its imposing  footprint, when viewed from the side.

Sky’s delivery team will handle the construction, and then take away all the packaging. If you want to wall mount, that's your call. It's hefty model, however, as our 55-incher tips the scales at 28kg.

The supplied controller builds on the basic Sky remote design, but is a little smaller and smoother in the hand than previous Sky remotes.

There may well be a multiverse out there, but you’d never know it using Sky Glass. Unlike the viewing experience on an Android or webOS TV (to name just two), this is a locked down Sky environment, and it's kinda cosy.

You don't need to venture outside this walled garden, because everything is provided.

The interface is recognisably Sky - consider it a cousin of Sky Q. Curated highlights, for Sky Max, Sky Atlantic and Sky Cinema, sit below a TV Guide rail offering what's on now across select channels.

Tab down and an App and Inputs rail offers up just that. Sky has assembled a solid assortment of streaming services here, 21 at launch, including Prime Video, Netflix, Disney+, BBC iPlayer, BBC sounds, All4, ITVhub, YouTube, discovery+ and STV player.

There are also Peloton and Fiit wellness apps, music streaming service Spotify, and an assortment of casual games.

But with no local storage, what you don't have is the ability to record shows to a hard drive, for playback as and when. This is the single biggest adjustment when moving from Sky Q to Sky Glass.

Instead you add to a Playlist (there's only one, no Profiles on offer here). This can be done via an 'Add Show' button on the programme summary page, or via the '+' button on the remote.

For the most part, this works well. Shows are available in your Play-listing and they stream from a 'Cloud DVR'.

However, they may also come via a standard catch-up TV app, which puts you at the mercy of the third party player. There is also some content which simply can't be added to the Playlist at all, like channels from BT Sport - this basically makes them 'unrecordable'.

Another TV staple missing is headphone support, for late night or private listening. Not only is there no Bluetooth headphone option, there's no wired 3.5mm headphone jack output. This is just plain bizarre.

The set does has Bluetooth, but it's just for the remote control.

It's important to note that the channel choice between Sky Q and Sky Glass is not exactly the same. We're a big fan of NHK, but it's AWOL on Sky Glass.

For whatever reason, our sample didn't want to wake up, even if you dance around in front of it (we tried), but it does auto nod off.

It'll turn on to a spoken "Hello Sky" command. This wake word has to be used before any voice command, so say "Hello Sky. BBC News" if you want to hands-free switch to the news channel. The set also acknowledges  "Hi Sky," but not "Yo Sky".

If you want Sky Glass in additional rooms, you'll need to add a Sky Stream puck to your package (it's another tenner). Unlike the Sky Q Mini, this doesn't rely on a connection with the Sky Glass screen, and it can serve you 4k UHD content.

That's because it's a completely autonomous Sky streamer. It offers the same interface and feature set as the Sky Glass screen, and you can connect it to any TV.

You can't buy a Sky Stream Puck separately; it's only available as a Sky Glass accessory. A Puck was not supplied for review.

In many respects, the audio visual performance of Sky Glass seems somehow less significant that the overall user experience, but it's obviously central to the overall package proposition.

After all, once in, you can't swap it after a year for something new. It has to deliver - and up to a point, Sky Glass does. But there are caveats.

While it offers options, it's clear that Sky doesn't expect users to dig around in the Settings menu and manually adjust picture parameters.

The default viewing mode is Auto. There are dedicated presents - Entertainment, Movie, Sport, etc - but each one comes with a nag to return to Auto. Actually we were hard pressed to tell the difference between these presets.

For the bulk of this audition, we did what most Sky Glass owners will do, and that’s stay on autopilot.

There's also Custom setting, with individual control of contrast, sharpness, brightness, and saturation. There are two Dolby Vision HDR settings, Bright and Dark. The former is our recommended option.

The screen has pleasing average picture brightness. However, it’s not the most dynamic HDR performer. We measured peak HDR brightness at 425 nits, with a 10 per cent measurement window.

But this doesn’t tell the whole picture. During our audition period, Sky dropped some new firmware which specifically gives HLG HDR a boost, offering a welcome lift to live Sky Sports coverage

For the best HDR performance, with real world content, we would suggest turning the Auto Backlight Adjustment off, and running contrast at around 90 on the slider.

The Sky Glass audio system significantly outperforms rival mid-range LED models both in terms of scale and power, the six-speaker 3.1.2 array creating a wall of sound that’s both wide and high. It's a lot of fun to listen to.

With Dolby Atmos content, there's no profound sense of overhanging audio, but you do get physical imposition with heft and clarity.

Movie audio is impressive. The set has a solid mid-bass as well as quite toppy treble. While it'll play loud, the set is at its best reigned in a tad. This prevents the highs from sounding too... glassy.

The idea is to negate the need for a soundbar, and for Sky Glass users it does the job nicely.

Should I buy the Sky Glass 4k HDR TV

You want to enjoy the Sky experience without the need for a dish
Sky has created an IPTV platform that's more nuanced and versatile than any streaming service currently available. It offers lots of choice, including a huge range of curated premium channels and top notch streaming apps.

You want a new 4k TV, but would rather pay monthly
The idea of costing the screen in with your packages is novel, and could well suit mainstream buyers.

You want a good looking all-in-one entertainment solution
The set has a chic design, and a Dolby Atmos sound system that's bigger and bolder than comparably priced rivals. It doesn't look, or sound, cheap.

You want leading-edge HDR picture performance
This QLED TV's AV performance is comparable to rival upper budget/mid-range models, rather than premium screens from the likes of Sony, LG, Panasonic and Samsung.

You're a PVR hard drive recording aficionado
Having channels available in a bottomless cloud DVR is a neat idea, but relying on catch-up players for some content can prove frustrating - especially for those who want to record live sport.

Your broadband speed isn’t up to snuff
Sky recommends a minimum of 10Mbps for HD and 25MBps for UHD content. If you don’t have sufficient bandwidth the picture will periodically freeze.